Networking Modern Prints in New York and Paris, 1880-1950 aims to record and interpret the complex networks that promoted printmaking as it gained an increasingly prominent role within modern art.  Beginning in the mid-nineteenth century, printmaking underwent a fundamental transformation.  As photography increasingly took over its use for image reproduction, the medium was redefined and thereafter used by vanguard artists as wide-ranging as Édouard Manet and Pablo Picasso as a means of artistic experimentation.  In spite of their important role in the emergence of modern art during the past century, the graphic arts have posed difficulties for researchers due to the large quantity of data that surrounds their production, marketing, purchase, and display. 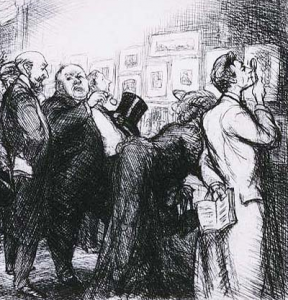 Drawing from substantial archival materials about artists, exhibitions, journals, and collectors that were accumulated over the course of dissertation research, we are analyzing the hubs of artistic activity and connections between print supporters from 1880 through 1950 in New York and Paris.  Using open-source software, we will interpret this data and reveal geographic, interpersonal, chronological, and contextual connections within printmaking, and between it and other media.  Ultimately, we hope to encourage a revised understanding of printmaking’s significance within modern art and facilitate research and collaboration between scholars in this field.

Britany Salsbury is a PhD candidate in Art History at the CUNY Graduate Center and a Research Assistant in the Department of Drawings and Prints at the Metropolitan Museum of Art, where she was the Andrew W. Mellon Curatorial Fellow from 2012-13. Her dissertation deals with the marketing, reception, and social role of print portfolios in fin-de-siècle Paris, and has been supported by fellowships from the Getty Research Institute and the Andrew W. Mellon Foundation.  Britany has been a researcher in the print departments of the Art Institute of Chicago and the Morgan Library & Museum. She regularly contributes criticism to publications including Art in Print, Artforum, and the Burlington Magazine.

Christina Weyl is a PhD candidate in Art History at Rutgers University. Her dissertation focuses on women artists who explored abstraction at Atelier 17, the avant-garde printmaking workshop located in New York City between 1940 and 1955. She has given several papers about Louise Nevelson’s Atelier 17 prints and has an article about them in a forthcoming anthology. In 2012-2013, she was the Jane and Morgan Whitney Fellow at the Metropolitan Museum. Prior to graduate studies, she worked for an art gallery representing the publications of the Los Angeles-based artists’ workshop, Gemini G.E.L. She earned her BA from Georgetown University.