Project Name: “Everything On Paper Will Be Used Against Me” – Quantifying Kissinger
Grantee: Micki Kaufman
Discipline: History
Funding Cycle: 2014-2015
Project Status: In progress

This project is a series of historical text analyses and data visualizations conducted on the DNSA (Digital National Security Archives)’s Kissinger ‘Memcons’ collection and ‘Telcons’ collection. After collecting the source documents and aggregating a range of descriptive metadata, ’n-gram mapping’ (measuring changes in frequency between words and phrases) provided the underlying engine of a broad computational approach. Using topic modeling, the documents were then grouped according to common patterns in these word combinations (‘multinomials’), a software-defined set of ‘topics.’

Using computational methods of this sort allows new quantitative avenues to explore a sophisticated challenge diplomatic historians face: assessing and tracking the changes in influence and participation of a host of individuals and organizations in foreign policymaking. For 2014-2015, the project seeks to capitalize on the contributions made to the field of digital humanities in the prior two years by expanding into a few new crucial areas of research including more sophisticated study of the topic models, an examination of the varying use of the telcons and memcons by Kissinger as exhibited in the metadata and text analyses, and the use of new modeling technologies and improved OCR. 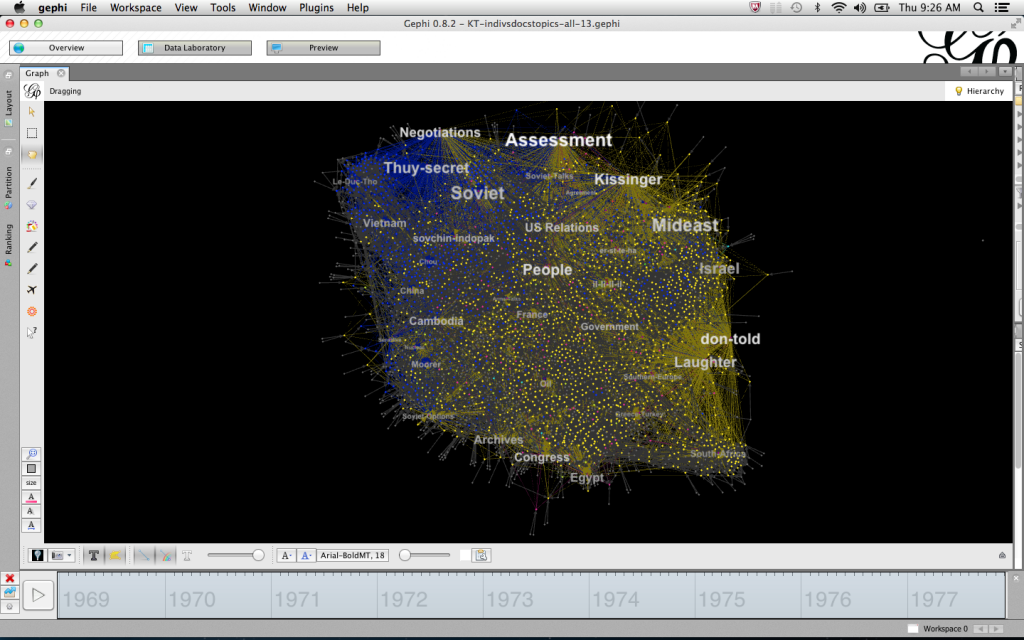 By analyzing components of language like pronoun usage; tone and emotion; past, present and future tense usage and other factors, the early phase of this analysis has already resulted in some fascinating findings, ‘jumping-off’ points for a closer reading of the documents themselves. In addition, the project has begun to create visualizations in animated form to show changes in various metadata (such as ‘classification status’, as the above Vimeo movie demonstrates).