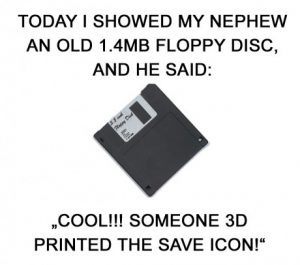 Kelsey Chatlosh: As the variety of digital technologies continue to expand and advance, more and more digital objects become obsolete when using contemporary hardware or software.  For researchers, this may arise as a roadblock to accessing data saved in an older digital form, such as floppy discs, older CDs, or VHS tapes. Many of us may just disregard data saved in those forms entirely, assuming it cannot be accessed.

However, this is not necessarily the case.  This blog post is to share a “digital forensics” success story of Angela Crumdy, a GC anthropology Ph.D. student and fellow cohortian and friend of mine, who was able to access an old CD with invaluable data on teachers in Cuba for her forthcoming dissertation research. Per my advice as a Digital Fellow who works closely with various realms of the #digitalGC, Angela reached out to GC’s Digital Scholarship Librarian Stephen Zweibel. He, together with GC Librarian Silvia Cho, hacked their way into the data stored on that old CD.

The following is Angela’s account of this success story. Read here for further insights on “digital forensics” from Stephen.

Angela Crumdy: I visited the Cuban Educator’s Association’s main office during my first reconnaissance trip to Cuba in June 2016 with the hopes of obtaining a copy of Inolvidables Maestros del Siglo XX (Unforgettable Teachers of the 20th century), an electronic index of notable teachers within the Cuban Educator’s Association.  According to my reading, Inolvidables Maestros had invaluable information that I could use for my research on Black women educators in Cuba before and after the 1959 Revolution.

When I returned from fieldwork, I was eager to find out what was on the disk.  In the GC library, I inserted it into the disc drive and waited.  The louder and longer the computer fan began to whirl, my anticipation grew.  I reasoned that this slight disturbance to my peers was justified by the forthcoming breakthrough.  The whirling only continued, and after a short while, the only things on the screen were some random designs and basic navigation buttons for “home” and “cancel.”  There were no teachers to be found.  Defeated, I placed the CD back in its plastic sleeve and restored the quiet in the library.  The CD became part of my “research memento” folder on my bookshelf at home where it would stay for the rest of the semester.

My breakthrough finally came this spring when the Digital Scholarship Librarian, Steve Zweibel, gave a talk to my proposal writing class about data management.  Digital Fellow and classmate, Kelsey Chatlosh, encouraged me to see if Steve could help me with my CD problems.  Within a week, I met Steve on the second floor of the library, hoping that he could get the disc to work.  Again, the computer fan began to whirl just as loudly and as long as before without presenting any actual content.  After enlisting the help of Silvia Cho, the Interlibrary Loan Supervisor who was sitting nearby and who had actually just gotten back from Cuba, it turns out that the disc was not scratched (my biggest fear), but that it was simply not compatible with the software on the school’s computer.  Luckily, we were able to locate the nearly 150 pictures and biographies of teachers by searching through the disc’s internal files. I was able to save the files I needed to my own computer, and I no longer have to worry about accidentally scratching the CD.

Many thanks to Steve, Silvia and Kelsey.  Pa’lante.